The Strength
of the Land 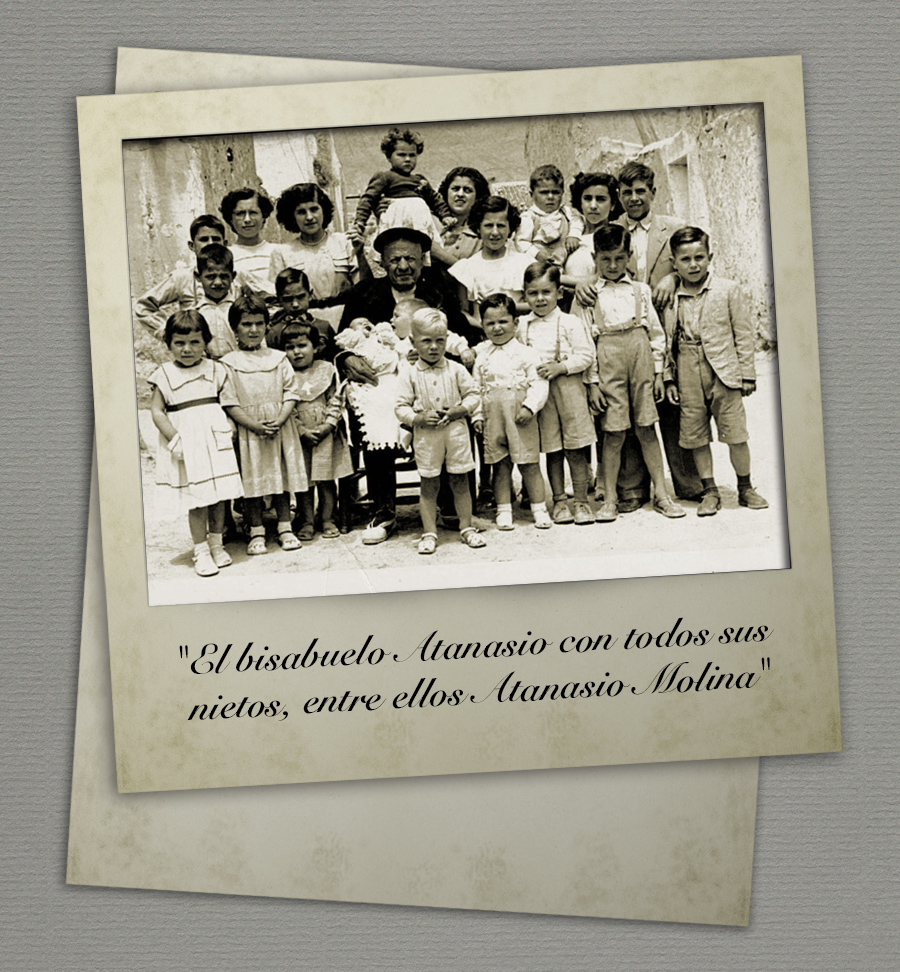 Finca de La Fuensanta is a group of estates in Jumilla in the Region of Murcia in southeast Spain owned by the Molina Cardenal family. Although the area is famed for its wines, it can also boast centuries of olive growing. Indeed, there is evidence that the Romans produced oil here, and the road that runs through the estate is known as the Jumilla to the Venta del Olivo (The Inn by the Olive tree) road, as clear a sign as any of the importance of the olive in this area.

The Finca La Fuensanta is home to centuries-old olive trees that grow alongside others planted recently. But this blend of youth and experience is not exclusive to our trees, the management of the estate is also a combination of traditional wisdom and energy and innovation.

Our company is the fruit of a decision taken by its founder, Atanasio Molina, who came from a family with a long history in agriculture. He had, from his early childhood, been well aware of the secret treasure that the land held, and it was this passion that led him to purchase the abandoned estate in 1982 and so add to the inheritance from his grandfather, Atanasio, and his father, Bartolomé Molina. He had one clear aim in mind: to produce the best olive oil that the land was capable of providing.

With the ceaseless support of his wife, Angeles Mª Cardenal, and his two children, Amaya and Iván, he extended the estate until it became what it is today: the Finca de La Fuensanta. The estate also comprises various spaces that now form a corridor that runs from the southern slopes of the Sierra del Molar to the northern slopes of the Sierra Larga.

The legacy of the great grandfather has been handed down from generation to generation, with each enriching it to the present day, when the family now faces the challenges of 21st century farming.

In the words of the members of the family who currently run the business and the heirs to the legacy that was boldly forged by their grandfather: “We treasure our olive trees and the surrounding area in which they grow so that we can produce and organic oil of exceptional quality and taste”

The olive tree symbolizes the strength of the land, the tenacity of constancy of the grower, and the patience and wisdom life brings.

Unlike other parts of the Mediterranean, there was never a Roman town with streets and houses in Jumilla. However, there were quite a few independent Roman Family Villas dotted around the area. Today these would be known as country houses. One of these, La Villa Romana de los Cipreses located in the Prado de Jumilla (6 km from the Finca de la Fuensanta) has been completely excavated and there is a clearly visible wine cellar and an oil mill, which was used not only for personal consumption but was clearly intended for trading too.

This type of villa with its own wine cellar and oil mill is found at other archaeological sites in the Jumilla municipal area, including one situated in our own estate, a testimony to the olive tree industry that stretches back over more than 2000 years. From such roots has our exceptional extra virgin olive oil arisen, extracted from olives that grow in perfect harmony with their natural surrounds.

Our estate is home to a catalogued archaeological site known as the Yacimiento Arqueológico Casa del Cura. According to the resolution of the Murcia Directorate General of Fine Arts. the site, "Corresponds to an Iberian settlement that continued to be occupied through to Roman times (from the end of the third century to the first century BCE). The settlers used two streams of drinkable water that are still used today to irrigate the crops that surround the site”.

.The villa is known as the Roman Villa of the Poplars and was discovered by Alfredo Morales in 1971 and was added to the Addendum of the Jumilla Archaeological Map in 1991, where it is described as an Iberian-Roman settlement.

The surviving ruins include a Roman concrete reservoir and the famous Hydraulic Poplar Splicer built of stone and lime concrete.

The cataloguing of these settlements is merely further confirmation of what we already knew from the history books. Olives have been cultivated in Spain for over two millennia, dating back beyond the Romans and maybe even as far back as the Phoenicians. However, it was in Roman times that their cultivation spread throughout the Mediterranean and the Iberian Peninsula, producing oils of exceptional quality that have filtered down to the present and which are today lovingly produced at the Finca de la Fuensanta. 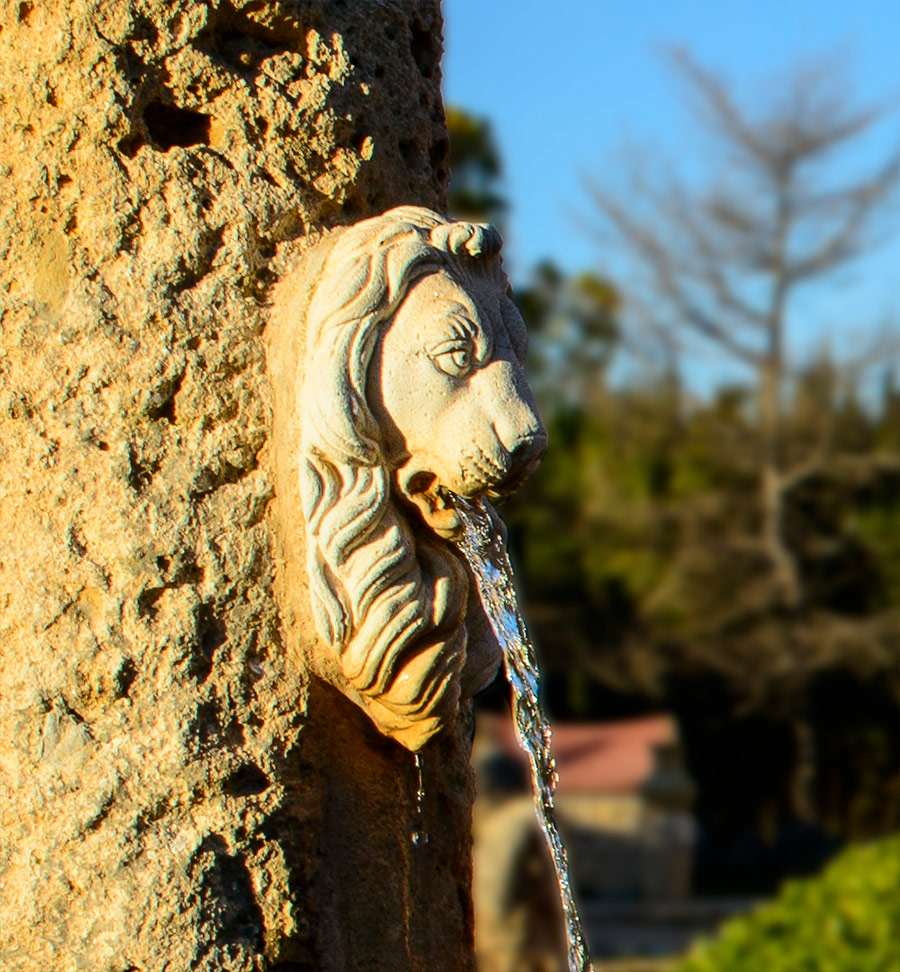 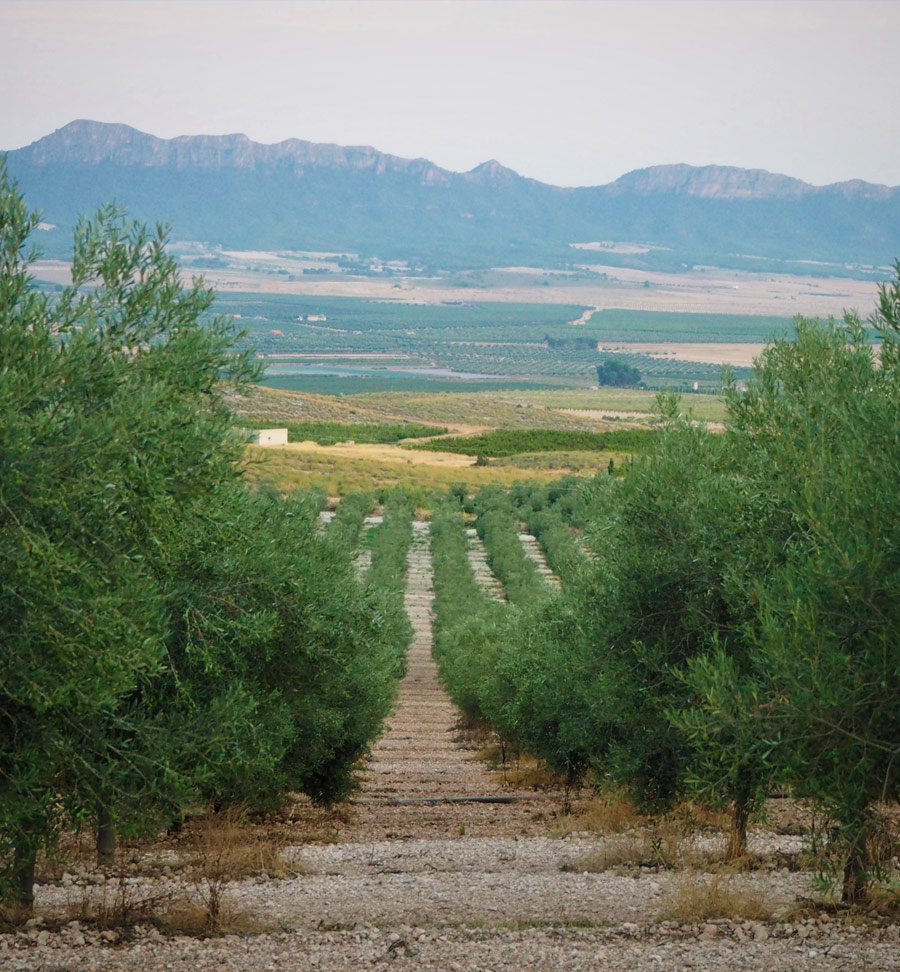 The Finca de la Fuensanta, lies in the Valle de la Cañada del Judío (whose name derives form a Jewish family that resided there throughout the fourteenth and fifteenth centuries). It is in this idyllic historical enclave in the heart of nature that our olive trees are to be found.

At the lower end of the valley we find the oldest trees, some of them over 200 years old. It is here that the soil collects the silts from the rainwater and becomes so fertile. And it is here that the Royal olive variety, originally from the Sierra de Cazorla in Jaen, is to be found. The recently planted trees stand in the northern part of the estate, on the sun drenched side of the Molar mountain range. They grow alongside a variety of aromatic and medicinal plants such as thyme, rosemary, savory and lavender. Some more recent neighbors are a quite sizeable herd of mountain goats which occasionally allow themselves to be seen during the hours of daylight.

The wide variety of olives, such as Picual, Arbequina, Cornicabra Murciana, Hojiblanca or Manzanilla, adapt perfectly to the stony soils, enabling us to produce an olive of character, yet with an exceptional taste.

Elsewhere, our younger plantations live alongside prehistoric remains, for our lands are also home to a series of cave engravings that date from prehistoric times down to the present day. These remains were discovered in 2005 and appeared the following year in the Catalog of Petroglyphs in the Municipality of Jumilla at the XVIII Regional Archaeology Conference.

The southern area of the estate, situated in the shady side of the Sierra Larga, enjoys protected land status on account of its scenery. Here we blend the growth of traditional almond and olive trees, some of them over 200 years old, surrounded by pines and holm oaks.

Worthy of mention among the varieties found here are the emblematic and ancient Cuquillo or Lechín de Granada, which are grown alongside other autochthonous varieties like the Cornicabra murciana, which give coupages of an intense, fruity and balanced taste.

Located on the lower slopes of the Sierra del Buey, in the Gimena valley, we find Finca La Gimena. Since its purchase, the aim has been sustainable, organic production, restoring the oldest, indigenous, Changlot Real variety, olive trees, and the Manzanilla types, while at the same time planting new Arbequina and Picual ones.

Alongside the olive trees we have almonds and wild olives to strike the right agricultural balance. These along with the pine trees, holm oaks, a smattering of junipers and the other Mediterranean flora make the perfect home for the olive trees to produce their excellent oil. 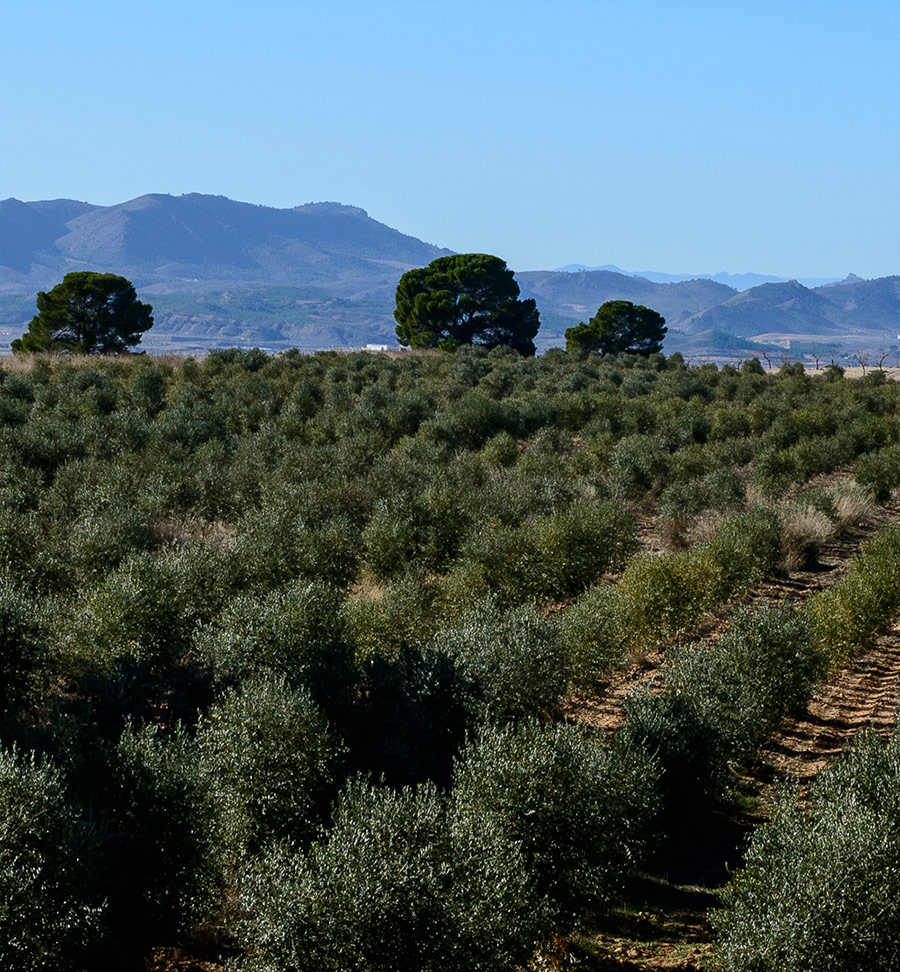 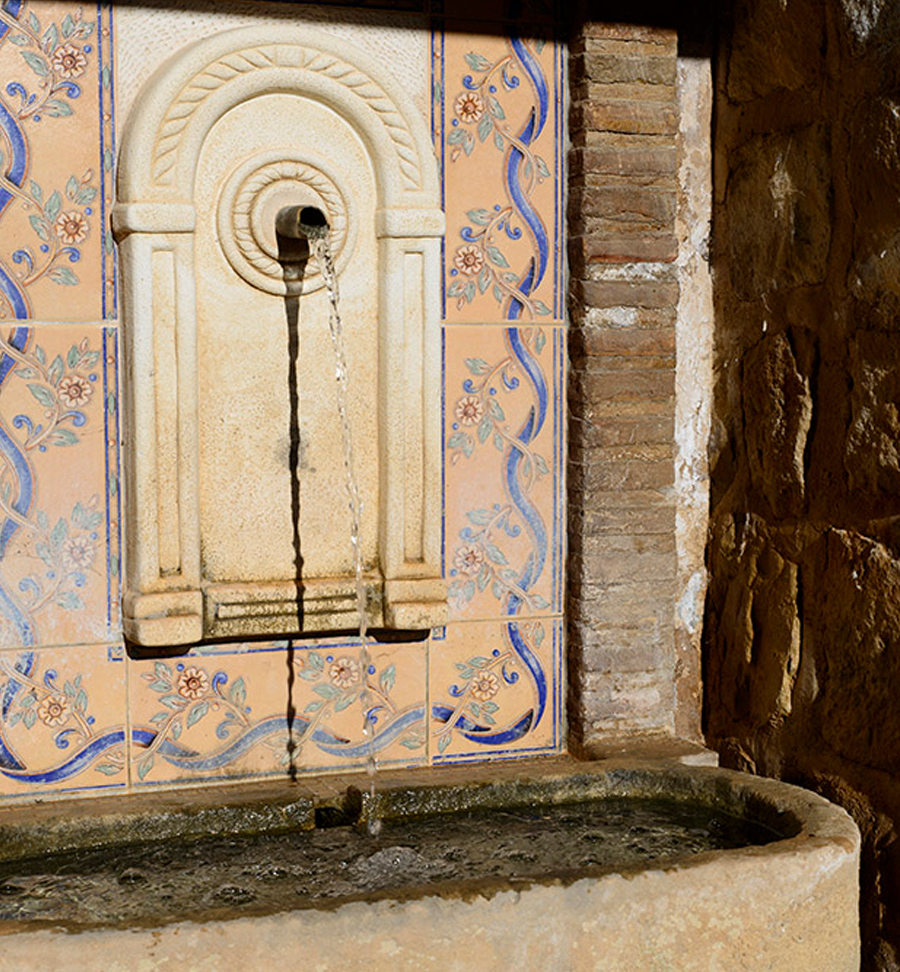 THE WATER FOR OUR OLIVE TREES

From deep inside the mountain flow two springs of clear clean water that irrigate our trees during the dry summers.

These springs run through underground galleries excavated over 300 years ago, through filtering galleries, until they burst out into the open world.

This age-old technique which dates back to Roman times is known as "selenite gypsum mining" and began to gain popularity in the mid sixteenth century.

It is a hydraulic technique that clearly represents how water can be used in an integral and sustainable way. Local systems generate high quality water. Filtering galleries are highly appropriate in arid and semi-arid areas. They work by capturing underground waters and use the natural currents to direct the waters to the surface